A quick catch up

Sorry I haven't written in a while. I've had writer's block so I have been dedicating most of my time to reading books and listening to music. But I haven't forgotten you -  here's a quick round up of things that have been orbiting my musical brain recently. 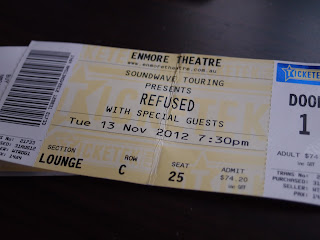 So last night I got to see Refused which was as incredible as I could have imagined. We arrived before showtime and it was a pretty interesting crowd. As my buddy and I took our seats, he remarked "wow, it looks like everyone is an extra in the punk rock scene of a big budget movie." And so it was, the mostly older punk set had gone to a lot of effort to get dolled up for the evening. Hilariously, to my right were two guys who took their fashion choices and demeanor from Ian MacKaye circa 1984, all black, bald heads and straight edge seriousness. As Refused literally tore the venue apart these two lads sat impassively looking bored. I think one of them may have tapped his toe once but that was about the level of enthusiasm they could muster. I have to say I was glad I got seats. I'm a small guy and when the band got going in earnest, from my vantage point above the standing crowd it looked like the most berserker out of control bunch of lunatics I've seen - hard pressed at the stage front with one of those violent tornadoes of bodies in the centre. Enthusiastic sure but those couple of bloody noses I saw coming out at the end probably spoke of how aggressive it was.

I make these observations because I'm only coming to grips with how amazing the show was. As the anticipation for showtime started to grow, the stage started to glow in tune with a growing wall of feedback before the band launched into the shape of punk to come behind a large sheet emblazoned with the band's name. As the sheet fell to reveal the band in full flight, the Enmore Theatre literally groaned under the weight of energy from the band which was fed back by the crowd. It was essentially a greatest hits set (as it were). For me it was almost surreal watching this band I'd listened to for years who I thought I'd never see were there before me - I couldn't quite believe it was happening. It's very rare I see a band and wish I'd learnt the drums but I did last night. Refused are anchored by the percussive fuck off ferocity of David Sandström - every great band has a great drummer and holy shit, Sandström is one of the best I've seen - intuitive, powerful and swinging - amazing. The guitars sounded like a sonic assault while Dennis Lyxzén's distinctive howl and James Brown dance manoeuvres were mesmerizing. The band seemed humbled by the ecstatic reception they were receiving and genuinely excited to play Australia.

The night predictably built towards the first encore of New Noise, their most well known song in Australia. I have been to the Enmore Theatre a number of times but I'd never seen it like this - I could have imagined the roof caving in such was the intensity of that moment where the right band, right song and right crowd collide in ecstasy. Probably one of the top ten concerts I've ever seen and when I got home, I couldn't sleep for hours, just reliving the experience and totally wired. A great, great show.

2. Soundgarden - King Animal
For a while now, I've been saying that a Soundgarden comeback album would be a bad idea. I'm glad to be proven wrong because it is nowhere near the clusterfuck of awful that I thought was coming. But that being said, there is nothing remarkable about it either. Realistically, it feels as if this album could have been record six months after Down on the Upside, they really have stood still In that respect. Upside was a disappointment and this isn't much better, it is listenable and enjoyable in spots but it's definitely not memorable. For me, Soundgarden will be forever defined by the caustic dissonance of Badmotorfinger ad the epic swing of Superunknown - this isn't close. This isn't the same ball park. Shit, this isn't even the same game.

3. Deftones - Koi No Yokan
Deftones are one of my favourite bands and even though they strayed for a few years (self titled, Saturday Night Wrist), even at their worst they're never less than interesting. After the perfect singular violent focus of their last album Diamond Eyes, the band have injected more dynamics into Koi No Yokan which swings with an intensity in line with their masterpiece White Pony. I'm sure you'll see that comparison a lot but I don't't think it's anywhere near the forward thinking, sideways shifting robo metal headfuck that makes Pony so brilliant. I've only had this a couple of days and it'll take me a while to digest where it sits in the order of Deftones merit but there are some great tracks on here: the smash and grab of Poltergeist compared to the majestic sweep of Rosemary but there is nothing weak on here. I'm going to dedicate my weekend to this and I feel pretty good about that. No doubt more to come on this record.

4. Bat for Lashes - The Haunted Man
I have to admit I was a big fan of her previous album Two Suns but this hasn't really grabbed me. The singles Laura and All Your Gold are the obvious highlights but for all the plaudits being poured upon it, I'm yet to hear it.

5. Godspeed You! Black Emperor - Allelujah! Don't Bend! Ascend!
I've long been a fan of Godspeed but I am the first to admit that I thought Yanqui U.X.O was a flat and listless affair. Allelujah! Don't Bend! Ascend! soars in a way that you rarely hear in music much these days. The dynamic waves of sound that turn on the most intricate whispered moment to a barrage of distortion is as captivating as anything else the band has ever done. Best consumed as a whole, Godspeed have produced a truly great album that reminds you why tags like post rock were invented and why they are ultimately, totally redundant.

6. Beth Orton - Sugaring Season
I've always been a fan of Orton's voice and Sugaring Season sounds like she decided to make a purest 70's folk album. This isn't a bad thing as the lush arrangements act as backdrop pushing her voice to the centre of the album. Mournful, gentle and elegant, it really is a lovely album.

I'm sure there's more stuff I've been listening to but that's the few things that come to mind. Anyhow, that's the news. Keep on rocking. Back soon.