A song a day: Metallica - Broken, Beat and Scarred


Metallica can't win. After the admittedly terrible St Anger, Metallica fans whined "why can't you make something like Master of Puppets again?" like anyone could produce an album like that with a click of their fingers. As soon as Death Magnetic was released the backlash was "what is this old man version of Master of Puppets?" Hey, at least they weren't trying to re-make Load. But the haters missed something about Death Magnetic - there were at least five songs that fucking rocked (even though it had the Unforgiven 3 - terrible) and it sounded like the band were having fun which meant as a listener, I was having fun too. People who both like and dislike metal often miss the indisputable fact that metal is fun to listen too but when it becomes to reverential, it just becomes boring. Death Magnetic gives enough devil horn throwing and air guitar moments to be a breezy Metallica blast of joy and listening to Broken, Beat and Scarred today I was reminded of that. Put your prejudice aside and let the devil take over...

A song a day: Phoenix - Love like a sunset

Phoenix meant nothing to me until I heard this song. Before that they were indie hipsters singing pretty songs and probably worst of all, they were from France (I kid, I kid). But when you essentially have a pop band put a eight minute song in the middle of their record and the vocals don't kick in until 6:13, you know something more is going on. While this song transitions through a number of different phases, there are moments of pure beauty that transcend any prejudice you can have against a bunch of good looking French people playing perfect pop songs. --
Posted by Jonathan at 12:00 AM No comments:

A song a day: Slint - Washer

Good Morning, Captain is no doubt the rightful centrepiece of Spiderland but Washer comes in a close second. The thing that strikes me about this song is that the members of Mogwai must have heard it (if not studied it closely) because it sounds like a template for many early early Mogwai songs (excepting the vocals). The thing about this song and Spiderland in general is that it hasn't aged at all and sounds somehow outside of history - a statement of musical purity that defies time and space. --
Posted by Jonathan at 12:00 AM No comments:

A song a day: The Antlers - I don't want love

There are so many bands that echo Radiohead but the Antlers are one of the few that don't suck. This is a simple song but the consideration and diligence in the orchestration and dynamics of the songs elevate it to a higher level. Peter Silberman's voice ranges between a devastating falsetto that at times can recall Jeff Buckley but it is it's own unique instrument. More late night music for a glass of wine and mild desperation - sad songs say so much. --
Posted by Jonathan at 12:00 AM No comments:

A song a day: The Kills - Future Starts Slow

I was never the biggest fan of the Kills and actually preferred Alison Mosshart in the Dead Weather. There was something unhinged about her performance in that band which was no doubt egged on by having to compete with Jack White to be the centre of the attention (until he started producing the Insane Clown Posse). However, this song cuts though my music ;loving soul like a rusty blade - great fucking lyrics and that riff, oh my lord, so simple but it rolls around my brain for hours and hours. The Kills normally sing about the menace and darkness but this time it sounds frighteningly real. --
Posted by Jonathan at 12:00 AM 1 comment:

Q: How to tell if you're middle of the road? 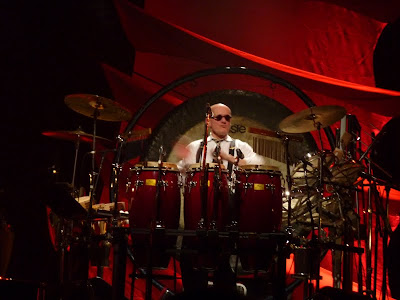 A: You get a percussionist to complement your drummer.

Whether you're hippie soul man Ben Harper, punk icon Joe Strummer or God-like guitar genius Eric Clapton - as soon you get some guy into to play chimes on your songs, any credibility you had is gone. Maybe Clapton needed a drummer AND a percussionist to replace Ginger Baker but it's still not cool. Unless you're some weird arse art band, you have no need for a percussionist...

What about Nick Cave you ask? Jim Sclavunos joined as a percussionist/drummer during Murder Ballads but this was immediately followed by Nick's least rocking album The Boatman's Call. Sure, there is certain percussive elements to the the Bad Seeds work but let's face it, Cave formed Grinderman to make music like the Bad Seeds used to make. Ain't no percussionist in Grinderman. Just saying...

Unless your music really needs it (like Sepultura), not a good move...

Email ThisBlogThis!Share to TwitterShare to FacebookShare to Pinterest
Labels: Percussion


I think every dog and his Norwegian grandmother will be writing about the 20 year anniversary of Nevermind (released 20 years ago today), what it meant, how it stands up blah blah blah so I won't go too crazy on it but talk about how it affected me. All I know is that at the time it meant a lot to me.

I remember hearing Teen Spirit for the first time on (alternative radio station) Triple J being introduced by Helen Razer as the "the best song ever fucking written." My ears pricked up at the swearing but I was almost in shock when the song hit its refrain - the power of that song was so immediate that even though I couldn't understand a single word being sung, it felt like a glorious discovery. Most of my friends had heard it around the same time and we anxiously waited for the album which someone bought and we all copied it onto tape for each other. This became our instant soundtrack, an album we bonded over.

At the time (the death throes of high school), I played in a terrible, terrible band called Wrapped in Plastic (yes, Twin Peaks was big for all of us). We were awful - I could barely play guitar but we entered an audition for a battle of the bands. We played four songs I think - early 90's standards Enter Sandman, Helter Skelter, some other song I can't remember and we finished with Teen Spirit. Even Wrapped in Plastic (we might have changed our name to Lithium by then), plausibly the worst band in the world at that point in time, could make that song sound good. I'm sure we sounded pretty bad but somehow those four chords translated and had power no matter how badly played. We didn't make the cut but other bands were coming up to us and asking if the last song was one we had written. "Sure" someone said but it was only a few weeks before Nirvana broke and we would be revealed as the unoriginal teens we were.

I actually had tickets to see Nirvana in Brisbane (bought before they broke big but by the time the concert was on, Nirvana-mania was at fever pitch). It was a double bill with the Violent Femmes, a band I couldn't stand at the time. When a friend of mine travelled 26 hours from interstate to see them without a ticket I gave him mine as I had to work the next day and wasn't sold on standing through the Femmes set. My words were "get me a tshirt and I'll catch them on the next tour." Of course, there was no next tour of Australia.

Many people got a bit sneery and indie snobbish when their little sister started liking Nirvana but I never did (the common thing being, "I like Bleach more and they were better before they were famous" even though pretty much no one I knew had heard of Bleach until Nevermind broke). I was an avid music fan and until that time Billy Joel, Dire Straits, Phil Collins, et al, was the discourse of the mainstream and the major magazines spent most of their time devoted to talking about how great the 60s were - Hendrix, Dylan, Beatles etc or indulging these aging dinosaurs. To have a band that I liked at number one seemed unthinkable, much less, be able to actually talk to people about music and have them know what the hell I was talking about. That it changed the discourse of music too - now that was exciting to me. If it gives you an idea of how into it I was, my sociology honours thesis was called Youth Subcultures, Nihilism and Capitalism where I explored the marketing of grunge. It was all a bit sad really but probably not as sad as having a degree in sociology and English literature.

My girlfriend always badgers me about never getting over the 90's and while I still listen to a lot of music from that time, I am always trying to find new music that gets me excited. I kind of hate nostalgia but sometimes getting older lends itself to it. But as someone wiser than me pointed out, Nirvana were the right band at the right time with the right album - a lot of it was about timing. In terms of timing, a few weeks after the release of Nevermind I turned 18. It meant I could see bands freely, drink and have that magical experience which is finding out who you are once you leave school. Nirvana and the music that followed was the soundtrack to that transformation so it will always be important to me and that is a product of timing. Maybe if I'd been eighteen when the first Michael Bolton album came out, maybe I'd be writing about that but I seriously doubt that.

I can't say anything new about Nevermind - most people know it, at least casually, if not inside out. For all the thousands of words that will be written about Nirvana now, I think I'd sum up the situation as Kurt went too soon, Nevermind is a good album and the music meant something to me. In the end, that's a vital part of what music is about, meaning something to someone and that's why Nevermind will endure.

Email ThisBlogThis!Share to TwitterShare to FacebookShare to Pinterest
Labels: Nirvana


I chose this song simply because I will be taking a few weeks off the blog and returning on the 24th of September. So goodbye for now. And how great is Grace? A near perfect album only let down by Jeff wanting to prove he could rock out on Eternal Life. But then again, I am yet to find the perfect album as it seems every great album has at least one lesser song (Electioneering on OK Computer, Fortune Teller on Copper Blue, Ignoreland on Automatic for the People etc...). If anyone has found the perfect album, I'd like to know about it. See you in a few weeks.