I have a bunch of friends who are obsessed with making mix CDs and their current obsession is coke rock (they're up to volume 9). Supposedly coke rock is excellent music to take coke to or at least explain the experience and as someone who has never tried it, I will defer to their expertise although I have been around enough overconfident assholes on the drug to get the idea. Coke rock is a not too distant cousin of yacht rock although it's not confined to that period of time but features all the big wigs of that genre: Steely Dan, Toto etc... (Check out the best of compiled below). Anyhow, the reason I mention all this is because a lot of Random Access Memories could fit into this genre as it sounds like a yacht rock/disco coke faced primer.

After a masterful marketing campaign (I'll admit it, I was sucked in), Daft Punk have delivered an album which is a deep exploration of neo-disco soul of the late 70's and 80's. I still maintain Get Lucky is a great song, lots of fun but it is not really like to much else on the record which tends to be mid-tempo plodders. There are a couple of awesome moments with the Giorgio Moroder tribute imaginatively titled Giorgio by Moroder and the final song Contact, which is a backwards/forwards freak out which once it it gets going, really gets going.

Overall though it feels like a little bit of a let down to me and I think there two reasons for this.

1. I remember when Discovery came out, I thought 'what is this retro 80's shit?' Everyone was raving about it but it took me a long time to get into it. It wasn't until much later you could see that Daft Punk were ahead of that particular curve. As such, there's a good chance this album will make a lot more sense in two years once the weight expectation has died down. (A lot of people seem to be making a similar point in reviews i've read and I think we can all agree Human after all kind of sucked).

2. My favourite Daft Punk album and general pick me up record of choice is the live album (Alive 2007). As a friend of mine pointed out at the time (hi Claire), that album is a bit of a cheat because essentially it gave the duo the opportunity to address the criticism of their previous albums and remix them into ecstatic uber-versions of those songs. Random Access Memories is a totally different beast and not aimed to give the sugar highs that Alive did.

As such, what we have is a reasonable record but I suspect it's not the record a lot of people wanted (I know I was expecting a balls out Michael Jackson-esque Off the wall disco party). I think once the distance between expectation and reality becomes greater, it'll settle into a pretty good party record. At the very least, there are some excellent additions to the next coke rock compilation.

Coke Rock Compilation for you: 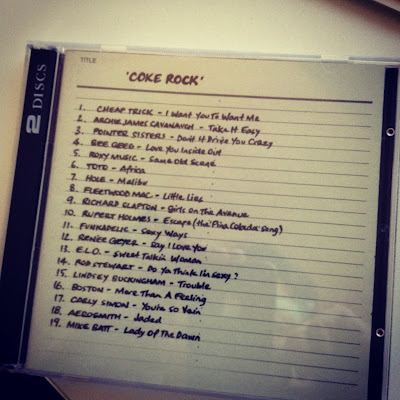