It’s very rare I go anywhere without music but yesterday I had to endure the pain of being non-music listening commuter. I had a meeting in the city which meant I caught the train home from Circular Quay rather than the usual bus from work. As I walked to the train station, I realised that I had left my ipod and headphones at work so this would be a trip made sans music. However, it took me back to the weird world of ipod oversharing.

Ipod oversharing is where someone has their ipod so loud you can hear the song/genre that is being played. As I entered the train, I first came across a young office worker who was listening to Usher’s DJ Got Us Falling in Love. I’m always surprised to see these weird vacant stares and expressionless faces when people are listening to dance music – or maybe vacant stares and expressionless faces are a trademark of Usher fans.

As I moved down the train, I came across crusty junkie playing hardcore techno. I couldn’t make out who the artist was but the thundering ‘doof doof doof’ which is reduced to a squealing distorted pulse indicated that speed was this guy’s drug of choice. I guess the music gave it away... as well as the sallow skin, ratty hoodie and teeth grinding. I walked past a metal dude in a suit whose “slow head bob with eyes closed in ecstasy” look to the roaring guitar riffing showed some sort passion for his music. It looked like he was doing everything in his power not to break out his air guitar and jam. I finally found a seat and was soon joined by a girl who was listening to unidentifiable Asian pop. I imagine the band looked like this: 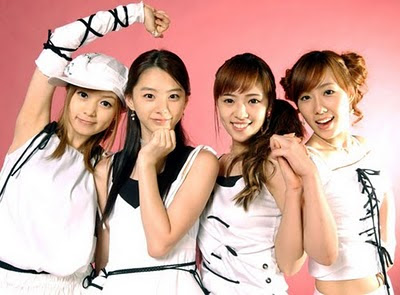 I know this is a common complaint but I think it may be a function of the shitty ipod earbuds which result in oversharing. I have a good pair of Sennheisers which even when I’m listening to stuff pretty loudly can barely be heard outside my brainscape. That being said, do you really want people to hear what you’re listening to? There is a new wave of phones that play music through a small speaker and it seems that bogans and kids like playing their music for the appreciation of everyone on the bus/train. A few weeks ago, I was behind a couple of forty year old bogan women who were playing Bon Jovi and singing along – love the passion but do you really need to share? I also remember being on an packed early morning bus to work when someone decided they’d play the Cranberries(!?) through their speakers. I couldn’t see who it was but then I couldn’t see who yelled “Can you you turn off that shit?” They did.

I mean, I think I probably have terrible taste in music but I choose to inflict it on the world through this blog rather than in person. And I think for that we can all be thankful. If only everyone was that considerate.

Email ThisBlogThis!Share to TwitterShare to FacebookShare to Pinterest
Labels: ipods