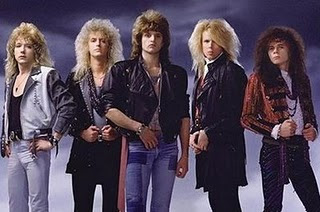 Recently I've been thinking about musical cannibalism and how bands totally rip off other bands. Maybe it's because almost every single song on the Pitchfork top 100 sounds like some eighties band but I started having a flashback about the metal bands of my youth, in particular Kingdom Come. Kingdom Come were a metal band widely reviled because they unashamedly ripped off Led Zeppelin riffs.

To give some context, Zep plagiarism was rife at the time and probably resulted in one of the worst songs of all time, Led Clones. Written by Gary Moore and sung by Ozzy, it is a Zep rip off complaining about other Zep rip offs which either makes it a tour de force of irony or just unrelentingly shit. Probably shit now I think about. Anyhow, Kingdom Come were seen as the worst of these (which also included prominent offender Whitesnake because of the lead singer David Coverdale's vocal Robert Plant-isms - irony and outrage followed when Jimmy Page made an album with Coverdale some years later).

This is not, however, the point of this blog entry. In my nostalgia, I decided to look at a Kingdom Come video on youtube - specifically this one. While the music is pretty terrible, what is really awesome is the comments on the song. They are universally along the lines of what an awesome time the eighties were and how modern music sucks. Here's some examples from this song:

- This takes me back to a better time... A time in which I was young, thin, long-haired, and every damn bit as handsome﻿ as I thought I was. Girls came easy, gas was cheap, and I ruled the streets in my 440-powered '71 Charger. Funny how you can burn 20 years in a blink... I'd really like to have the girls, hair, and the Charger back. I would gladly trade my current life for that again...

- back in 89 in my friends BMW and lots of beer, playing loud﻿ and proud. *yeah*

Ahh metalheads - endlessly entertaining but almost every hair metal or glam song has really intense comments of this nature. I was a teenage metal head around this time and I can understand the misty eyed nostalgia - pre-PC times when men were men when they weren't dressed like women. And then Kurt Cobain washed it all away but not in the way I thought. Here's a a lesson on the real reason grunge succeeded (courtesy of Slaughter Up All Night video):

Grunge didn't do shit. The only reason grunge even﻿ stuck was cuz o timing. Motley Crue had fired Vince Neil. C.C. Deville left the Poison, Ratt, Europe, Stryper all Broke-Up early into 1992. Had that not happened Grunge would not even be remembered 2day. 1989 Bleach album NO SALES cuz Glam was still the most requested on radio in 1989. But 2 years later, many glam bands breakup & nerdvana release their piece of shit so-called album nevermind with virtually no competition.

Not quite how I remember it but then again C.C. Deville leaving Poison really was one of those pivotal moments in music history. So, if you've got some time, I recommend going for a dig around some old glam youtube videos and read the comments - it'll take you back to a more beautiful, simpler and hairier time...